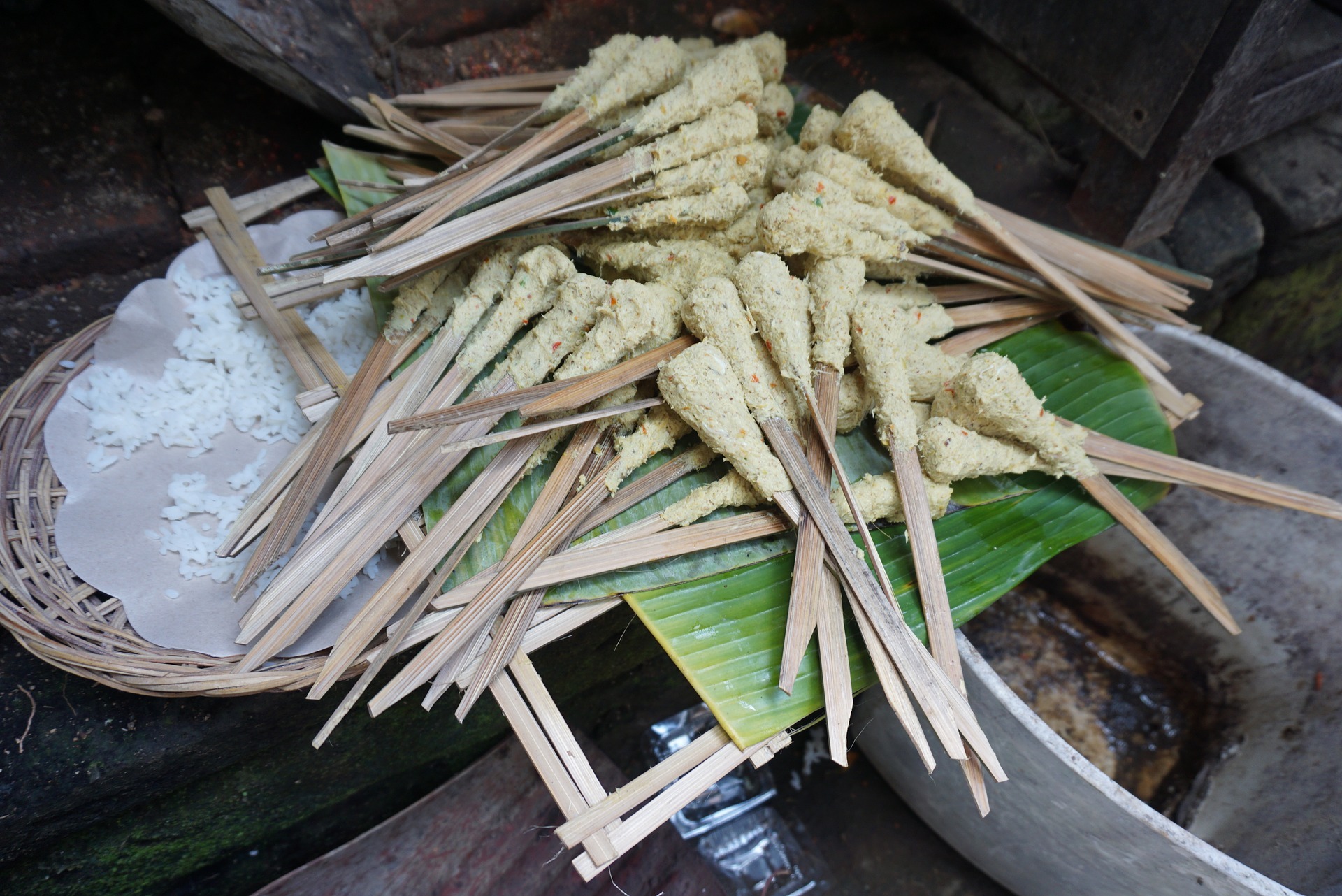 Thousands of islands with different cultures make up Indonesia, so it’s no wonder that Balinese food is just as diverse. To complement your holiday experience in Bali, you would not want to miss out on some of its most popular dishes.

Sate(or satay)are marinated, skewered and grilled meats served with spicy sauce. The meat usually consists of diced or sliced chicken, goat, mutton, beef and pork, but you’ll also find satay that’s made with fish, tofu, eggs or minced blends. Bali’s variant is the sate lilit. It is made from minced beef, chicken, fish, pork, or even turtle meat, it’s also mixed with coconut, coconut milk, and a rich blend of vegetables and spices. The satay is then wrapped around bamboo, sugarcane or lemongrass sticks before it’s grilled over charcoal. You can enjoy sate lilit with or without sauce.

Nasi ayam and nasi campur known as Bali’s own take on chicken rice, nasi ayam and nasi campur can be found served at many warungs (small eateries) and restaurants throughout the island. The dish is mainly white rice served with different elements of Balinese food, such as a portion of babi guling(roast suckling pig) or betutu (spiced chicken or duck), mixed vegetables, and a dab of spicy sambal matah (Balinese sauce). Nasiayam and nasi campur is served with a bowl of soup sometimes. For those who are not a fan of spicy food you can simply ask for it without the sambal.

Bebek and ayam betutu. Betutu is the slow-cooked equivalent of Bali’s babi guling (roast suckling pig). Suitable for those who don’t eat pork, this iconic Balinesedish consists of a whole chicken (ayam) or duck (bebek) stuffed with traditional spices, wrapped in banana leaves, then enveloped tight in the bark of a banana trunk. The entire thing is baked or buried in a coal fire for 6 to 7 hours, resulting in a rich and juicy meat that easily separates from the bones.

Babiguling Babi guling is an all-time favourite of the Balinese, consisting of spit-roast pig stuffed with rich traditional spices and vegetable mixes such as cassava leaves, slowly rolled over (guling means “to roll” in Indonesian) a coal fire. The crisp brown skins are prized, while the meat is a tender and juicy treat. At first, the dish was a communal treat during special festivities and ceremonies, but now babi guling can be found widely served at warungs and restaurants specialising in this dish.

Tahu and tempeh is the most versatile of food items, tahu (tofu) and tempeh come in different preparations – some as savoury snacks, and others as accompaniments and main-course dishes. These soybean curds may be fried, stuffed and battered. Many Indonesian cuisines, especially rice dishes, include tempeh crackers. Some of the best tahu snacks are the stuffed and fried versions, which usually include a mixture similar to spring rolls.

If you’re up for seafood Jimbaran seafood is the answer. Most of the beachside cafés on Muaya Beach in Jimbaran Bay typically serve grilled seafood, ranging from shrimp, clams, crabs, calamari, lobsters and a wide assortment of fish. But in terms of taste, the secret lies in each of the café owner’s recipes of barbecue sauce and condiments – usually in the form of homemade sambal, which has collectively become known as “sambal seafood –Jimbaran style”. From sweet-sour blends to the typical hot and spicy, tasting is believing when it comes to Jimbaran seafood.

Pepes and tum are an Indonesian Sundanese cooking method using banana leaves as food wrappings. The small package is sealed with thin bamboo sticks at both ends before it is steamed, boiled or grilled. It is commonly used to prepare fish as pepes ikan, but meat, chicken, tofu or vegetables are common ingredients as well. Tum takes on a different form, with the wrapping folded and stitched at one top end, and is usually steamed. Tum commonly contains minced pork mixed with spiced paste. The use of banana leaves adds an aromatic and authentic Balinese flavour to pepes and tum.

Lawar is a traditional mix of finely chopped meat, vegetables, grated coconut and spices. In some areas, it is prepared with fresh blood mixed with meat and spices to strengthen the flavour. The dish is usually served immediately after preparation as it cannot be kept long. There are 2main types of lawar – white and red. The white version appeals to vegans and vegetarians as it doesn’t have meat or blood.