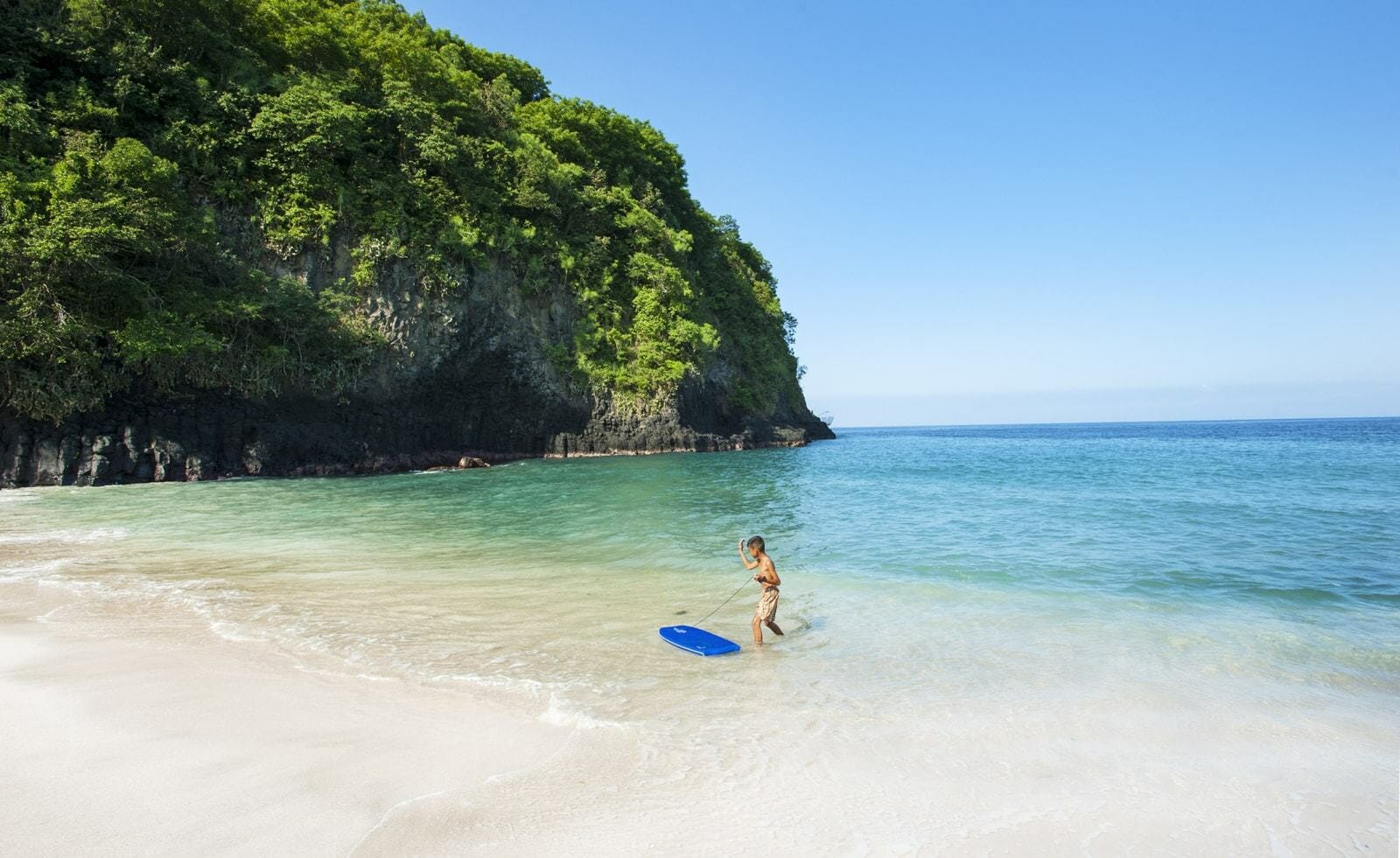 Part one in our series highlighting some of Bali’s less well-known beaches. These aren’t ‘undiscovered’ beaches, just great places to visit for those visitors to Bali who may only know the main tourist beaches such as the Kuta/Legian/Seminyak beach on the south-west coast, Jimbaran beach and Sanur’s numerous beaches on the south-east coast.

Heading south just past the huge Mulia resort in Nusa Dua there’s a small turning on the left towards the Hindu temple of Pura Geger. The name of the small road is Jalan Pura Puget. There’s a security post, where locals will collect an ‘entrance’ fee, at the time of writing, of Rp.5,000 for motorbikes. Head straight on towards a rudimentary car park, and look for the stairs leading down to the lovely, quiet, white-sand beach.

The best time to visit is at medium tide. At high tide, the beach is almost submerged beneath the waves, while at low tide entering the water can be quite rocky. At medium tide, you’re rewarded with lots of small, beautiful white sand beach coves accessible either through the knee-high (for an adult) sea or through lovely caves and rock formations. Often you’ll be able to find your own secluded cove for a romantic getaway.

Accessed by cable-car from the exclusive Karma Kandara resort (paid), or for free via the steps at the same resort for those who consider themselves extremely fit, this beach is also home to Sundays Beach Club, as well as Karma Resort’s own Karma Beach beach club. Surrounded by cliffs, this beautiful white sand beach leads down to clear, aqua-marine waters with gentle waves.

The easiest way to access this beach is to head south on the Bukit Peninsular on Jalan Uluwatu, and once you have passed Nirmala water park, look for the signs to Karma Kandara resort on your left (before the Dreamland exit).

This one is a hidden gem. On Bali’s south-east corner, past Candidasa and on the way to Amlapura and the delights of Amed beyond, Pasir Putih, translated as White Sands, has recently been renamed Virgin beach. Look out for the white sign on the left as Jalan Raya Bugbug turns into Jalan Raya Perasi. Once through the little village, continue on through stunning rice fields and ancient woodland until reaching the parking area at the top of the hill. Pasir Putih is a two hundred metre walk from the car park to the beach.

The beach itself consists of lovely white sand, is surrounded by cliffs, hills and greenery, giving it the feel of a Thai beach. There are a wealth of local warungs at the rear of the beach to tuck into some fresh seafood or a mie goreng. Though not a surfing beach, the waves here are particularly powerful and break very close to the beach, leading to some great fun getting in and out of the water (or watching others trying to do so).

Bali’s beautiful and unspoilt Amed area has been a favourite for divers for many years. Although the area is commonly referred to as Amed, it actually comprises a number of villages and bays, with Amed being the first village reached when approached from Amlapura.

The next village along the coast is Jemeluk, itself a magnet for snorkellers with its crystal clear waters and amazing sea life. Around four kilometres further south is the lovely village of Lipah. Being on Bali’s east coast, there are no real waves to speak of, just calm warm waters and great snorkelling. Snorkelling equipment can be hired from vendors on the beach, along with sunbeds and even canoes and stand-up-paddle boards.